The recent Premiership Rugby Scholarships winners enjoyed a once-in-a-lifetime day this past Friday that culminated in them stepping out onto the pitch at Franklin’s Gardens during Northampton Saints’ match with Harlequins.

In an unforgettable experience, the American rugby coaches took in the match and got a closer glimpse at their surroundings than they were expecting when they were welcomed onto the turf at half-time.

The day saw the 26 coaches taken under the wing of Leicester Tigers as they visited Welford Road, Oval Park training ground and Brooksby Melton College to shadow more training sessions at first team and academy level as well as continue their Level 300 qualification learning.

Kaitlyn Kelly is just one of the women on the trip who are aiming to help grow the game amongst the female population across the pond.

The 30-year-old is a member of the United States Army, having served on an active level for six years while she is currently in the reserves.

Kelly has mixed rugby with the military ever since switching over to the sport while on a basketball scholarship at the United States Military Academy before she then played while stationed at Fort Bragg North Carolina before getting involved on a coaching level with Scion Rugby Academy.

“You see a lot of correlation between rugby and the military,” Kelly said. “A lot of times you do things that are physically and emotionally demanding, you might be drained but you get up after every tackle and every carry.

“There’s so many lessons in terms of leadership and loyalty, I always say grit don’t quit and that started when I was in the military. A month in the field, you’re pulling patrols at two o’clock in the morning but you grit because you know that it’s because of something.

“It’s also like an emotional outlet, to be able to release the things that you have inside of you based on the things you’ve seen or what you’ve gone through in the military – it really speaks testament to the sport itself.

“Leicester Tigers is a class organisation, from as soon as we walked in and watched the non-23 players practice, to see what they were focusing on and how incredibly committed they were speaks testimony to the culture of the club.

“The assistant defence coach came over and showed us his breakdown sheet and I just asked him if I could take a picture of it because it’s such a beautiful way to layout a training session and he said oh no just have it.

“Something so simple to him, it’s just a piece of paper, he doesn’t realise the effects that that has.”

Last week the programme, which works in partnership with the Friends of the British Council and USA Rugby, saw the participants receive an extensive insight into high-quality rugby coaching on a journey which will saw them take in Wasps, Leicester Tigers and Northampton Saints.

In addition, they have embarked on a Level 300 coach training course co-delivered by Premiership Rugby and USA Rugby – empowering and providing them with the skills to support of the development of the game in America.

Elsewhere, Olivia Benzan-Daniel was thrilled to be gaining valuable experience in the UK which she hopes to take back to the US. 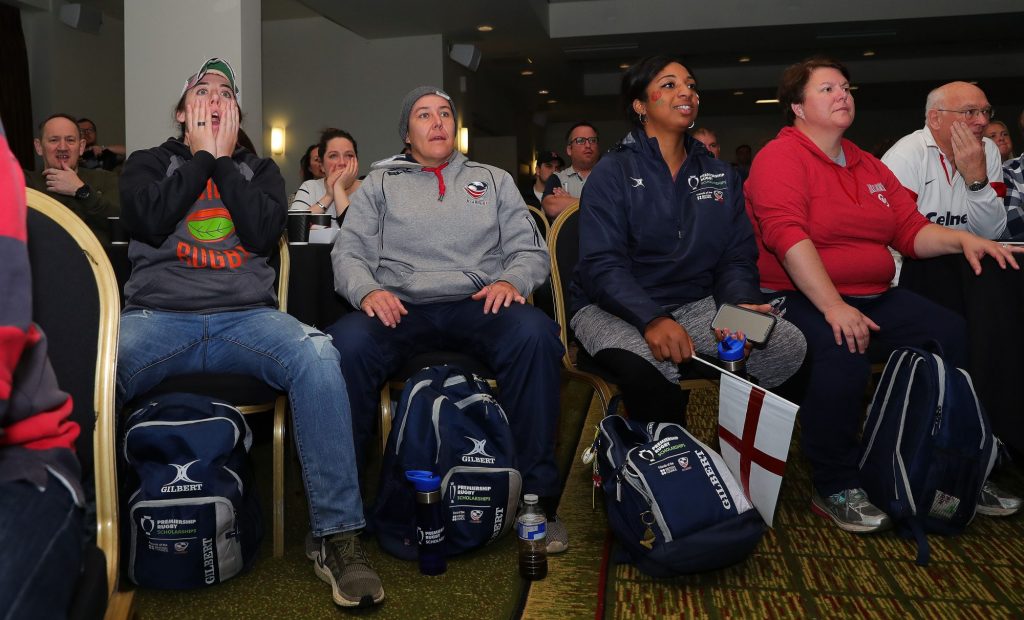 She said: “I want to bring more of a player focus back from this experience. I thought I was player focused before but the session we had on player welfare yesterday made me realise I could do way more.
“I want to really connect with my players on a more individual level.

“I’ve really enjoyed the whole experience, it has been fantastic. What I’ve liked is we’ve gone to really different clubs, Wasps, Saints and now at Tigers.

“Wasps play at this huge stadium with lots of fans and all kinds of great things and then you go to this kind of local club in Northampton and then Tigers are sort of in the middle – just seeing how different clubs operate but how they do the same things at such a high level is really cool to see.”

The Scholarships programme began in 2018 and to date has seen 69 coaches from 32 states visit the UK and get unprecedented access to some of the best minds in the game.

Jessica Burda Leslie, who is a USA Rugby educator and currently coaches a boys high school team having played for University of Wisconsin Stevens Point and Wisconsin Women, wants more female coaches in the sport so that there are people for women to look up to in the game.

She added: “I think it’s really important that female players have role models that are people like them. It’s hard when you’re growing up as a girl to envisage a professional pathway into something that could be a career, if you don’t see people like you.

“A lot of us grow up and we have male coaches so I really encourage girls and women to get their coaching and/or referee certifications, not only to be a part of it but to also give back and grow the game for girls.

“This trip has been fantastic, we have a really great diverse group of coaches and everyone brings a lot of insight from different levels.”

Applications for the 2020 Scholarship visit will open in January, 2020. To be in with a chance of winning, you will need to submit a video outlining how the experience will positively impact your coach delivery and you must have completed your USA Rugby Level 200 coaching qualification prior to the trip.